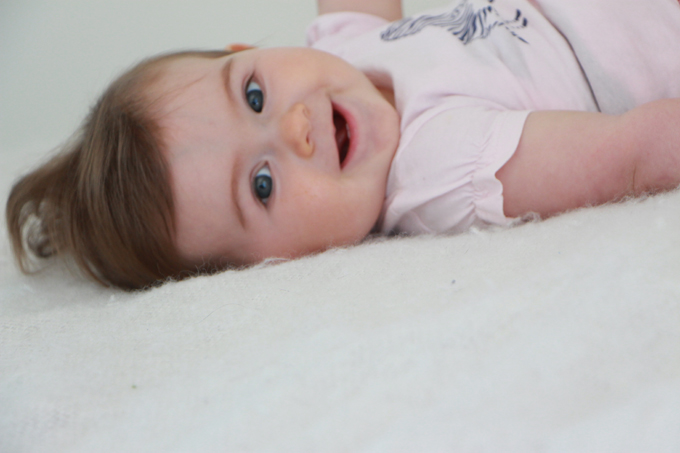 How on earth did we get this far so quickly? We now have a 7 month old baby, soon to be 8 months old!

Motherhood definitely isn’t a breeze, but I am absolutely loving being a mumma these days and this kid keeps me smiling all day long, even on the rough days. I think that right now is my favourite time so far. There is so much going on and you can also really see her personality starting to come through.

No crawling yet, and the has only ever rolled from her back to her belly once, although I can often see her in the monitor trying to grab her snugglebear and she looks like she is almost about to roll over. Lately when I have been going to her room at night or in the mornings, she seems to have wormed her way up to the top of the crib. I have no idea how she is doing this! I’m not too worried about milestones, because when I look at her, she looks fairly normal to me, so whenever she is ready is fine by me.

I am loving 2 naps a day for Chloe and she seems to be much better on it too. She now wakes at about 6.00am in the morning, and goes down at 9.00am. I swear, any less than 3 hours and it’s a crap nap. She usually takes 1.5 hours, and we’ve had the odd 2 hour nap (and one crazy 3 hour nap!). Afternoons are still only 45 minutes, but every now and again they’re longer.

So days are going pretty good. I’m sure you can tell, because all of a sudden I’m posting recipes again!

Nights are fine too…. once we get her down. She used to self settle at night, but refuses to these days so I’m having to rock her to sleep, or sometimes she just wants me to stay in the room. I feel like during the day we’re in full on separation anxiety mode, so I wouldn’t be surprised if this is what is happening at night too. That said, given this kids long awake times, I am still not 100% sure what time bedtime should be each day and whether she is undertired or overtired. Gee – can you tell I’m a first time mum!

Chloe is still feeding at night. Usually only once, but sometimes twice or rarely three times. They say that when you go down a feed, never start it again, but honestly, I just can’t be bothered doing anything about it… and I don’t really think there is anything unusual with feeding at night at this age and feeding is the quickest way to get her back down.

I really thought that if I didn’t have a superstar sleeper, I’d be blessed with a superstar eater, but she isn’t really a rock star in that arena either. We started with BLW, but then there were a few times when I had some soup or something and she was acting like she really wanted to eat it and wanted me to feed it to her, so then I started purees, but sometimes, she just clamps her mouth shut and doesn’t want any of it, and more often than not, she’ll have two tiny teaspoons and be done, so sometimes we’re doing BLW again. We’re kind of a mish mash based on Chloe, but 99.73% of her diet at the moment is breastmilk.

Because she is going so long between naps – 3.5 hours in the middle of the day, I couldn’t be bothered calculating 3 or 4 hours, so I basically just feed her before and after naps, or about 5-6 times each day.

Chloe has been enrolled in daycare! Eeek! And it looks like I’ll be back in the office on Thursdays and Fridays next year working on projects. Chloe will only be 10.5 months old and I’ll still be breastfeeding, so depending on how solids are going, I might need to pump at work (judging on how we’re going now I’d say there is a high probability of that occuring!), but I must admit, I do feel quite liberated and I think it will be good for her too. 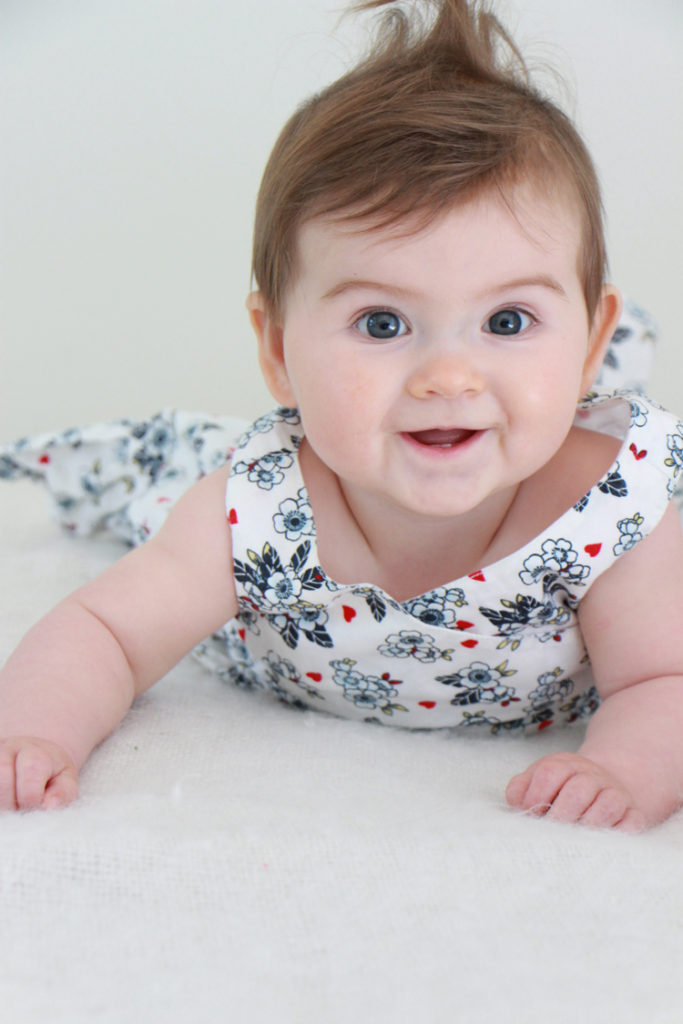 Loves: Tapping the floor and having me tap or clap back, touchy feely books, the paddle pool, taking things out of containers – like the pegs, putting EVERYTHING in her mouth, her snugglebear, her mumma

Dislikes: Other people – especially when they sneeze or laugh or talk loudly, bedtime, most food – especially this oat and banana cereal I got for her