Seriously, I can’t believe I have a 12 month old baby! Well, she’s not a baby anymore, right? She’s a toddler, although it doesn’t feel that different to just a few months ago. 12 month old Chloe has been just like any other Chloe – full of personality, always pushing the boundaries, and a lot of fun! The transition to 1 nap has been bananas though.

For her birthday, she had a joint ‘party’ with her 3 year old nephew, Isaac, whose birthday is a few days earlier than hers. We just had a small family picnic at King’s Park which was lovely. It just so happened that Mother’s Group was on Wednesday that week, the same day as Chloe’s birthday, and we were able to make it, and the girls made that really special too.

Overall, our Little Missus has been a bit clingy (I swear these wonder weeks are spot on!), and has fallen ill a few times, which is to be expected with daycare, but mostly happy. 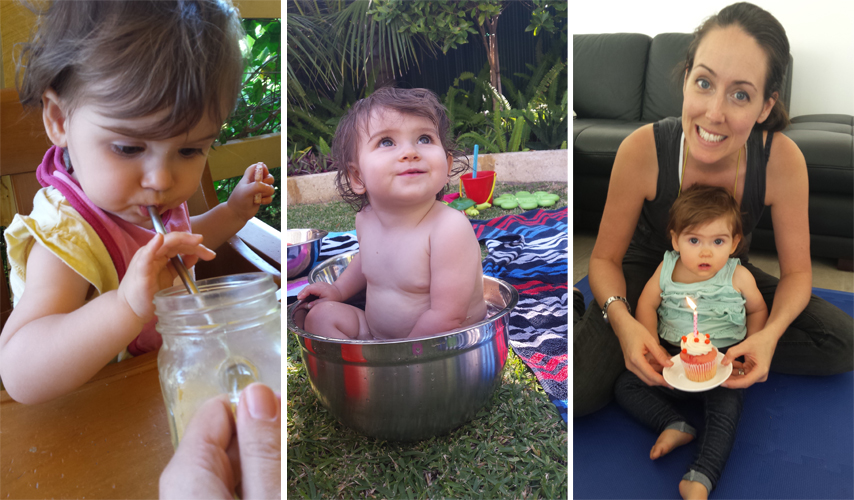 We’re still not walking, but I think this kid is nearly there AND she will love it! She can now stand on her own which is super, and she loves standing, grabbing her walker, and heading off…. to the wall lol. And then I turn her around and she goes back.

We bought her a little rocking horse thing over Christmas, and she loves rocking on it. Sometimes she isn’t really smiling so I don’t think she is having a good time, but then the horsey noise runs out and she wants it back on again so I figure she must be enjoying herself.

Perth has been quite hot lately, and one day, my neighbour and her Little Missus came over for a play and we got out some metal bowls from the kitchen and filled them with water. What does Chloe do? She stands up and sits in the bowl. Kid cracks me up every day!

Well. If you read my 11 month update, you’d have heard that we were up 6 times a night at that time, with Little Missus insisting on being fed every.single.time. Exhausting!

But also, we went to the fertility clinic as we’ve been advised not to wait too long until trying again and we were told that we MUST wean in order to begin treatment.

And so the weaning began.

I popped a mattress in her room (which is still there) on the floor and just slept in the room with her. The first couple of days were a bit rough, but now it is SO much easier. If she wakes (which she still does), I can pop my hand on her and she’ll just go straight back to sleep, rather than these huge meltdowns she was having with back arching and everything in the middle of the night. And, having a mattress on the floor makes it easy, because if she is having a rough night, I can just go and sleep there and lay there, instead of having to get up and trudge it down the hall.

She has been a bit sick this month, so I’ve slept on that mattress a fair bit – almost the whole month, and for about a week, she would sleep with me on the mattress. Mmmm those snuggles!

Naps have still been a disaster, but I’m hopeful we’ll get there. Yesterday she took one decent nap in the middle of the day, so I’m just going to keep shooting for about 11.30am and see what happens.

As mentioned, we’ve been weaning our Little Missus, so the only feed I have left at the moment is the bedtime feed, which I’ll be dropping soon.

What she eats hasn’t changed that much, but how much she eats has – I swear she pretty much just eats the whole day! Lots of fruit.

I want to give her chia puddings and smoothies, bu they’re a work in progress, but she is using her own spoon these days and can pretty much dig into anything. I’m wondering if I do a smoothie bowl……

My parents went away for 2 weeks and just got back, and it was then that I realised that you really do just need an outlet as a mumma. For me, that outlet is both my job and my blog. For others, it might be going for a walk, or going to a yoga class, or something else. BUT YOU REALLY NEED IT.

I reckon a kid will slowly turn you loopy if you don’t have something that’s for you and a regular break and I really feel for people who don’t have the support that I (usually) do.

If you don’t have family or friends nearby who can look after your babe, a few things you can try to keep yourself sane are:

Do you have any other suggestions?

Loves: climbing onto the chair in her room and then dive bombing me from the mattress, water play, playing in the park or backyard, the cats, listening to someone speak on the speakerphone, her nana and grandad, her daddy, pretending to dig in the backyard, being pushed around in her little car, bananas (I swear naana is her first word!)

Dislikes: being dropped off at daycare, being told ‘no’, getting in the car when she is tired or hungry, having her nappy changed

So, every now and again I’ll still drop over with a Little Missus post, but they’ll probably be less regular these days as I focus on getting a few more recipes out xx