My beef with Nat Kringoudis 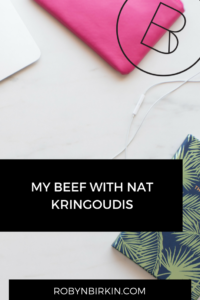 I was speaking with a friend not so long ago about fertility and hormones. It was a healthy discussion, and she mentioned the webinar series on hormones that Nat Kringoudis and Lisa Corduff recently did mentioned something along the lines of ‘Nat Kringoudis said that vegans are the hardest to treat’

You know how the hair on cats backs spikes up when they feel threatened?

That’s exactly how I felt when I heard this. I started to feel a little bit angry and a bit outraged.

I generally try to keep things zen, but lately I feel like I keep getting bees in my bonnet, like when I wrote this post on people telling those with infertility to stop stressing.

But my jaw genuinely dropped and I could feel my tensions rising when she said this.

I decided to google Nat Kringoudis vegan, and up popped an article that said Could a vegan diet be messing with my hormones.

Nooooooo. This was terrible.

Because Nat Kringoudis is an expert.

She is a Doctor of Traditional Chinese Medicine and specialists in female hormones and wellness and things like PCOS, estrogen dominance and ovulation. She has HUGE influence and she’s a bit of a big deal in the female fertility space.

And she was bagging a vegan diet?

I am someone who has lived in the trenches of infertility (heck, I’m still there!) and someone who has actually walked in those footsteps, and yet I became vegan whilst on my fertility journey.

Many people don’t realise or have forgotten, that when I first started trying for a child, I wasn’t even vegetarian. Granted, I didn’t eat a lot of meat, but I wasn’t vegetarian, and I certainly wasn’t vegan. I only became vegan shortly before we started seeing a fertility specialist. And my hormones were always text book. I have always produced good quality eggs, and a heap of them. How much of that can be attributed to a vegan diet, one will never know, but I certainly credit my overall health to following a plant-based diet.

I started thinking about our society and how big a factor in fertility weight is. Many fertility clinics now won’t accept patients for IVF who are above a certain BMI (Body Mass Index) because the rates of success are so low, and I truly believe a plant based diet is a great way for people to maintain a healthier weight.

But more so than that, diets associated with female ovulatory dysfunction have been widely studied and researched. One of the largest studies conducted was The Nurses Health Study, which studied 116,000 nurses and found that by following ‘The Fertility Diet’, this group of women showed a 69% decrease in ovulatory dysfunction.

One of the key elements of this diet, was more plant-based than animal based protein.

I felt like I was preparing for battle with someone I didn’t even know.

So I read her article. And I signed up and watched the webinar’s with Lisa and Nat and learnt a lesson in the process. Things aren’t always as they first seem.

When I read Nat’s article, it turns out that I actually 100% agree with it. Her article states that every single one of us are different and we need to look at our own situations and see what diet works for us.

The thing is, that while there are a lot of healthy vegans on the planet, there are a whole bunch of unhealthy, junk food vegans, and a tonne of women undertaking a vegan diet as the next weight loss, thigh gap, Beyonce fad, and that ovulatory dysfunction and infertility is also caused by a BMI that is too low.

The thing is, that The Fertility Diet also recommends a higher fat intake (of healthy fats, of course) and a lower carb (particularly refined carb and sugar) intake and lots of vegan diets (including mine a times! oops) are a carb fest.

The thing is, that chemicals and processed food play a huge part in our hormones too.

For me, I’d spent years gorging myself on dairy. I felt sluggish and it clearly didn’t agree with my gut, although in some respects, because I ate it so often, my body was tolerating it, but it was only when I gave it up for four months and discovered how different I felt, that I could see it didn’t agree with me.

As Nat says – we need to tune into our bodies, and listen to them and how they truly feel.

And lastly – My beef with Nat Kringoudis… get it? It’s an article about being vegan, and I worked beef into the title? So I guess I don’t really have a beef with Nat at all – in fact, I totally agree with her… and have had a good reminder to actually READ and LISTEN to stuff before jumping to conclusions.

Let me tell you, I think I need to watch those webinars again because they were so good – knowledge is power!

What are your thoughts around a vegan diet and infertility?

My beef with Nat Kringoudis