You know Roses and Quality Street chocolates and how they have that strawberry flavour? That used to be my all-time favourite!

I haven’t had these in ages, partly because they’re not vegan, but as it is with my dessert recipes, I feel like I think in my head they’d be good, it mulls in there for a while, and then bam! a few months later, I’m like ‘I can combine this, and this, and this, and voila!’.

I had that moment with my strawberry creams recipe and I’ve been dying to try it out and they worked out perfectly. 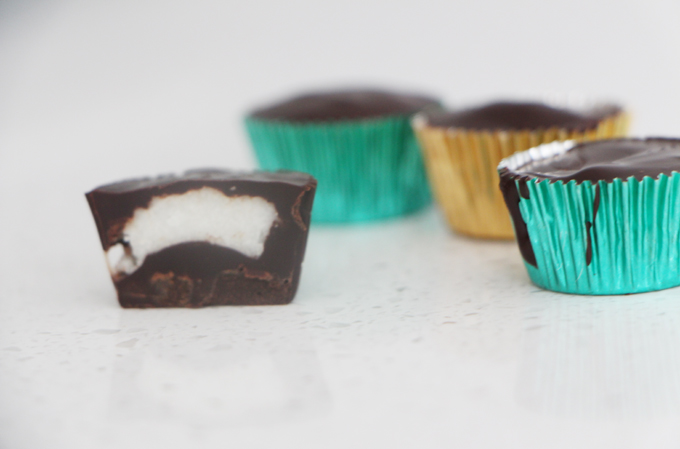 As I was making them though, I realised something.

I think I’ve been on a bit of a sugar high! When I talk about sugar, I don’t mean white sugar – I mean maple syrup, coconut sugar, fruit juice, fruit, agave syrup.

I wrote a post on sugar not so long ago, that talked about the different types of sugar and has a handy chart too (as much of a reference for you as it is for me!).

In normal circumstances, I eat a few pieces of fruit each day (usually an apple or two and some berries), and that’s about it, but lately:

I’m cool with sugar, but I think it needs to be a few pieces of fruit a day, and then a treat once in a while.

… But I had this magical brainwave with these strawberry creams

Of course, I tested the block of chocolate before using it (had to check I was using quality ingredients!), licked the spoon of the remaining chocolate, had a few more pieces, tasted my creation… a few times… you know… just to be sure.

Just to confirm with you… they’re pretty awesome!

… and then I had a massive headspin and had to sit outside in the fresh air for a few minutes.

Sitting there in the veggie patch, I listened to my body.

So I think I need to steady on with the sweets for a few months…. as soon as I finish these strawberry creams…. and the block of Pana Chocolate currently in the fridge…. then I’ll have a break for a few months. 🙂

Save Print
Decadent Chocolate Strawberry Creams
Author: Robyn B
Ingredients
Instructions
Notes
I buy my moulds from Weigh n Pay in Woodvale - they have a great selection. Here you can also buy Strawberry Oil and all sorts of other goodies (including vegan goods like CoYo), but I bought my Strawberry Oil from a kitchen store in Joondalup.

The amount of dark chocolate you melt depends on how many moulds you have - this will make about 10-12, although I don't recommend reducing the quantity of the coconut mix because it makes it harder to blend the coconut. What I did with the leftover is put it into little flat love heart moulds on its own to make a lovely creamy mix (almost like a white chocolate). The coconut mix will also keep in the fridge (covered) for a few weeks.

P.S. Check me out at the Virtual Vegan Potluck