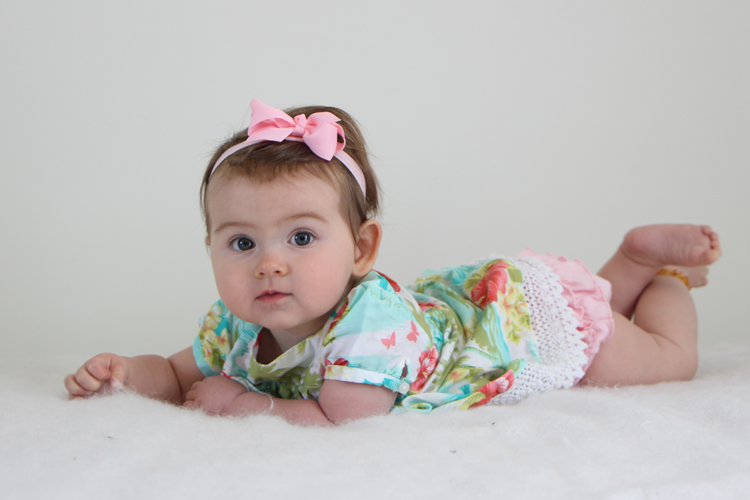 Chloe is 8.5 months old! How did this happen? Honestly, ever since we hit the half year, time is zooming by, and being a mumma bear is now officially my favourite thing in the world.

No crawling yet, and the has still only ever rolled from her back to her belly once, but the thing that cracks me up lately, is that she is getting her feet in between the bars of the cot and swinging herself around, so I’ll often find her sideways or having done a complete 180º in the cot. She is also super fast at pivoting on her hands these days when she is doing tummy time.

Nights are ok. I’m still nursing at night. We go through phases – sometimes once and sometimes twice… we’re in a twice phase at the moment. I know all the books say that at this age they shouldn’t be feeding twice a night, but honestly, I don’t care. I’m not going to worry about night nursing until she is at least a year old. I just think there is SO much going on for a bub at the moment, that if they need that comfort or extra calories, then that’s fine, and I keep thinking about how much Chloe changed when she hit around 6.5 months, and how things can change in an instant.

But, I am totally ready for her to sleep through the night. Ever since we hit 8 months, I feel like the adrenaline ran out, and I know I’m not the only one. I swear it should have a name because nearly all mumma’s I know who are still feeding at night hit this point at 8 months. 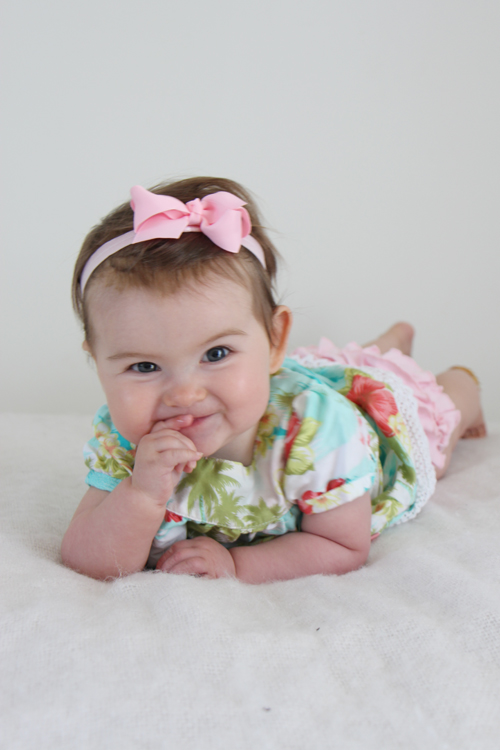 We have gone back to baby led weaning these days, and because we’re so close to her having chunky food if she were on purees, I’m not going backwards now. Just one day for about a week, she absolutely would not eat anything on a spoon. I feel like in the last week though, she may actually be eating something! There is hope yet…

I’m still nursing around 5-6 times a day- before and after naps. It’s probably more than many people at this age, but eh, who cares.

I have had a lot of work on lately. So much that other than the ongoing projects, I don’t think I’m able to accept any more work. It’s been hard because I don’t have any fixed days in the office, so when people want to meet with me, I have to arrange it around Chloe (I leave her with my folks and they usually give her a bottle of liquid gold from my freezer stash and put her down for one nap) because I’m just not ready to leave her for a full day yet… (I don’t think my boobs are either!), but that means that sometimes I’m going in about three times a week, and pretty much the only time for me to get something done is at night after she goes to bed, or before she wakes in the morning… and I swear she has some kind of radar that goes off when I do, because she’ll wake super early on those mornings!

Loves: Water – she’ll drink from a glass, and tonight I caught her trying to drink the bath water!, looking at herself in the mirror, being read to – these days she’ll sit silently and listen most of the time, cuddles and cuddling people, empty boxes with things in them, squeezing things really tight with her hands

Dislikes: Most people other than me, Rosco, my sister and my folks – aahhh separation anxiety, bedtime, the portacot (long story involving a weekend in Margaret River and literally NO sleep for anyone!)