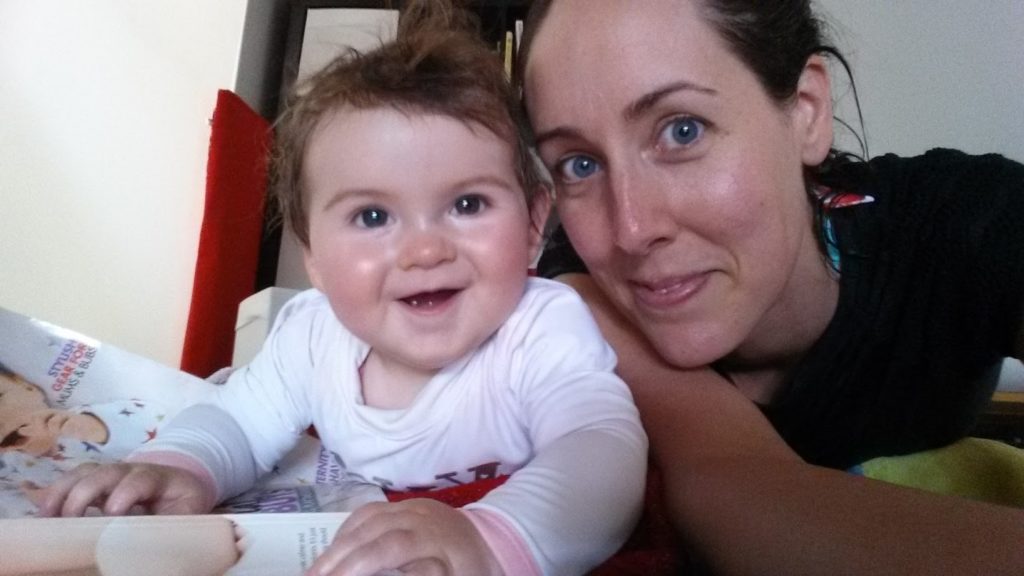 I actually don’t have a 9 month old baby anymore… the kid turned 10 months old on Christmas Eve! This post would have been done earlier, but I’ve been doing, oh, just a million things… like changing the blog design (what do you think?).

Life with a baby (a getting older every day 9 month old baby!) was crazy. Here’s what happened to us in the last month.

Chloe is a mover! She started commando crawling (probably to get to a pair of shoes ha ha) shortly after she turned 9 months old. We had our Child Health Nurse Appointment though (is it just me or do you always walk in there feeling really confident and then walk out thinking ‘huh, what just happened?) and the nurse said it probably wasn’t anything, but that I should take Little Missus to see a physio because she still wasn’t rolling from back to belly, bearing weight on her legs or sitting up on her own.

It was actually really good. I’m not kidding you – by the end of the appointment she was rolling both ways, and about two weeks later (without really doing much) she was sitting up on her own. So…. taking a shower is interesting. I used to just pop her on the floor just outside the shower while I hopped in and out, but once she started commando crawling, oh boy! Once, I took my eyes off her for two seconds, and then when I looked back she wasn’t in the bathroom, so I ran out nudie and found her just about to start putting the cat food in her mouth. So, now she gets locked inside with a billion toys and a constant eye on her.

So last time I wrote I said that I wasn’t going to worry about night nursing until Little Missus was at least a year old, but I changed my mind. I’d have happily (well happily-ish) continued night nursing but:

So it wasn’t really one thing. It was a combination of things and the time was/is right for us. If we are ever blessed to have another, I think our weaning story will be a little different.

So, there was about a week or so when I thought that I was just not going to feed her when she woke at 8.30/9pm, and I’m not going to lie… there was a lot of rocking, and shushing and head stroking etc going on and there was one night when it took until about midnight for her to go back to sleep… but that yelling. Just. Drove. Me. Around. The, Bend.

Then, we planned to night wean over the Christmas break. Unlike our friends, nope, it hasn’t been a one night affair. Anyway, I’ll fill you in next month.

On naps – the kid has been skipping her afternoon nap about twice a week. What the? I thought they were supposed to keep those until they were about 18 months old. Anyone want to place some bets with me on when she’ll decide she’s done with two naps for good?

After I cut down to one night feed early on when Chloe was 9 months, I cut out the two feeds before naps. It was always me initiating it really because I didn’t think she could go that long without her feeds because she stays awake so long but I just dropped them one day to see and she was fine.

She started eating heaps more too so that was a relief. I don’t think she was ready before though and sometimes it is still a bit hit and miss, but I feel like something clicked with her and food at 9 months old. So, that cut back to 4 day feeds and 1 night feed.

We’re kind of doing a mix of babyled weaning and chunky purees, just depending on what ingredients we have at home and whether we’re out and about.

I’ve had a break from work. Yessss! I love work while I’m there, but while I’m home I always think about how nice it would be to just stay at home and be present with bub… but like I say… when I’m there I love it.

In preparation for Little Missus starting daycare for two days a week from 11 months, we’ve been popping in there for a play every week fr about 30 minutes – 1 hour so she gets used to the environment and reognises a few familiar faces. This should be interesting….

Loves: Looking at books – she just sits and examines them lately, fruit – especially mango and watermelon, her daddy (it is SO cute!), the cats – she tries to follow them all the time, my glasses, taking books off the bookshelf, Taylor Swift – Shake it Off

Dislikes: Being away from me – like even half a metre from me is too far, sitting still while I change her nappy, sleep… but that’s no surprise, wet wipes – Chloe is a moist towel girl… so refined lol

Reminder: the number of followers you have on Inst

Sooooo what are your thoughts on surrender and the

I felt stubborn.⁣ I wanted to 'have it handled'

For all the calls and thousands of dollars saved,