I had never even heard of roasted red capsicum hommus until I saw it on another blog (Powercakes). Kasey had taken a picture of the hommus and I thought HELL YEAH!, so I asked where she got it, and she replied it was a store bought one from Wholefoods.

Man, they have so much stuff in the US.

Anyway, I’ve been trying to wean myself from a previous dairy addiction, and the thing that has really helped is having other spreads and stuff handy.

I had a red capsicum, I had tahini, I had chickpeas… what was I waiting for! 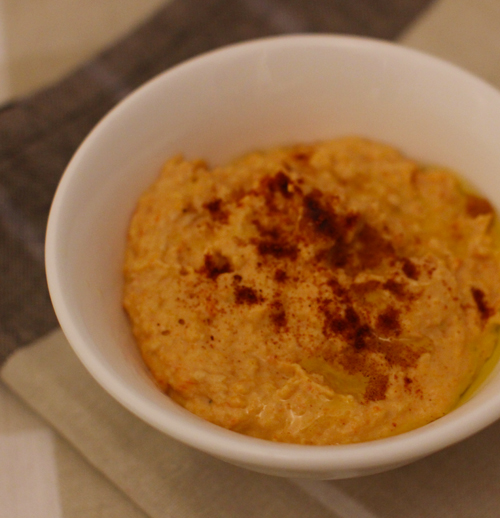 I stuck the capsicum and garlic in the pizza oven while Ross was cooking himself something, and turned it a couple of times until it was blackened and cooked through. Otherwise stick it in the oven until the same thing happens – I’d say about 30 minutes,

Peel the skin off both the capsicum and garlic and put them in the food processor with everything else.

What other dips can I do? Any suggestions?