Ahhh Monday, once again. Have you got on board with Meatless Monday yet?

Here is some guidance on cooking potatoes two ways 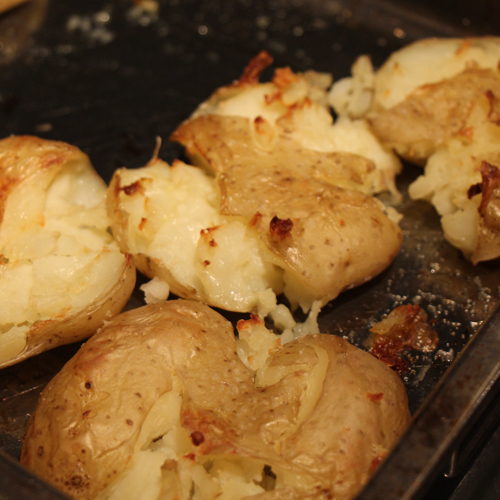 Ross likes hot chips, I like mashed potato. The compromise is smashed potatoes. Crunchy on the outside, but soft on the inside. Mmmmm….

Pre-cook your small potatoes, either in the microwave or the steamer, or par-boil them.

Put some olive oil and a bit of salt on a tray. When the potatoes are pretty much cooked (you can fork them), put them on the tray, then get your potato masher, and given them one big push down. You’ll basically be able to hear the potato split open stop holding itself together as much.

Give it another little drizzle of olive oil and put it in the oven until you see the edges of the potato go golden brown.

I’m telling you, there is a knack to homemade chippies. You essentially need to cook them twice. I par-boil mine until they are 75% cooked. Usually, a good way to get potatoes to hold their shape is to put them in when the water is cool (not boiling), and THEN bring to the boil, but I’m pretty impatient, so I often just boil the kettle and put them in the pot with the boiling water.

Once they’re 75% cooked, drain them and toss them in a bowl with some salt, pepper, paprika and any other herbs you like. This is the key step, people! It uses less oil, and stops them sticking to the pan.

Then, cook in a hot oven until they’re golden brown.

Serve with a side salad, or some steamed veggies, and then you could add: