When you suffer from infertility, at some point, you will most likely visit an Acupuncturist. Even my specialist agreed that some studies have shown that acupuncture has been shown to increase success rates.

So, in the spirit of giving everything a go, for about 4 months, I visited an Acupuncturist. This is how my first appointment went.

I arrived at the clinic, not quite knowing what to expect. In the same way that Japanese food tastes better cooked by Japanese people and Italians have the best veggie patches, I went to a Chinese place.

I walked through the door, and my Acunpuncturist was a smallish man, about 35 years old, clearly from China as there were moments at times when we had a language barrier.

He checked my pulse (I’m presuming to check I was still alive – check), and then told me to stick out my tongue (perhaps to check that I wasn’t sneaking in any contraband – check).

Then he quizzed me about some very intimate things such as how many days my menstrual cycle would last for, whether there were any clots, and how often I pooed. As you can see, we got friendly pretty quickly.

Then, he told me to lie on the bench, face down, with just my bra and knickers on.

In my head, I had envisaged some sort of beautiful retreat with candles and soft music and that I’d just lift up my shirt a little and he’d stick some needles in my stomach and then I’d relax in the serene surroundings for a while as the needles worked their magic, but alas, I was stripping down to my knickers and bra, in a room that looked a bit like an office, but randomly had a sink in corner and a massage table in the middle.

Now, I’d already left my dignity at the door when I started visiting the fertility clinic (more about that another time), but there were two reasons why this was a little wrong:

Fail. But, in true infertility goddess style, I sucked it up and while he momentarily left, I disrobed, hopped onto the bench and put a towel over my booty.

And that is when it got so much worse.

When he came back in and was getting ready to put the needles in, he undid my bra strap. Massive cringe!

Can you feel me dying of embarrassment?

As creepy as it sounds, I have no doubt that this happened with the utmost professionalism.

But, it was one of the most awkward moments of my life. Seriously.

He then stuck what felt like a trillion needles in my neck, my back and my legs, which was followed by an awkward half hour of laying there in silence in ‘the office,’ which went a little like this:

What should I make for dinner tonight?

Did I hand in that submission at work? Oh, I had better not forget to check those website stats.

Robyn, cut this shit out and relax!

I wonder how many minutes this has been?

Oh, for crying out loud, girl!

….. and so it continued for 30 minutes, before they came and took out the needles, I paid my bill and I was on my way… hairy, gorilla legs and all.

And, that was my first acupuncture appointment. 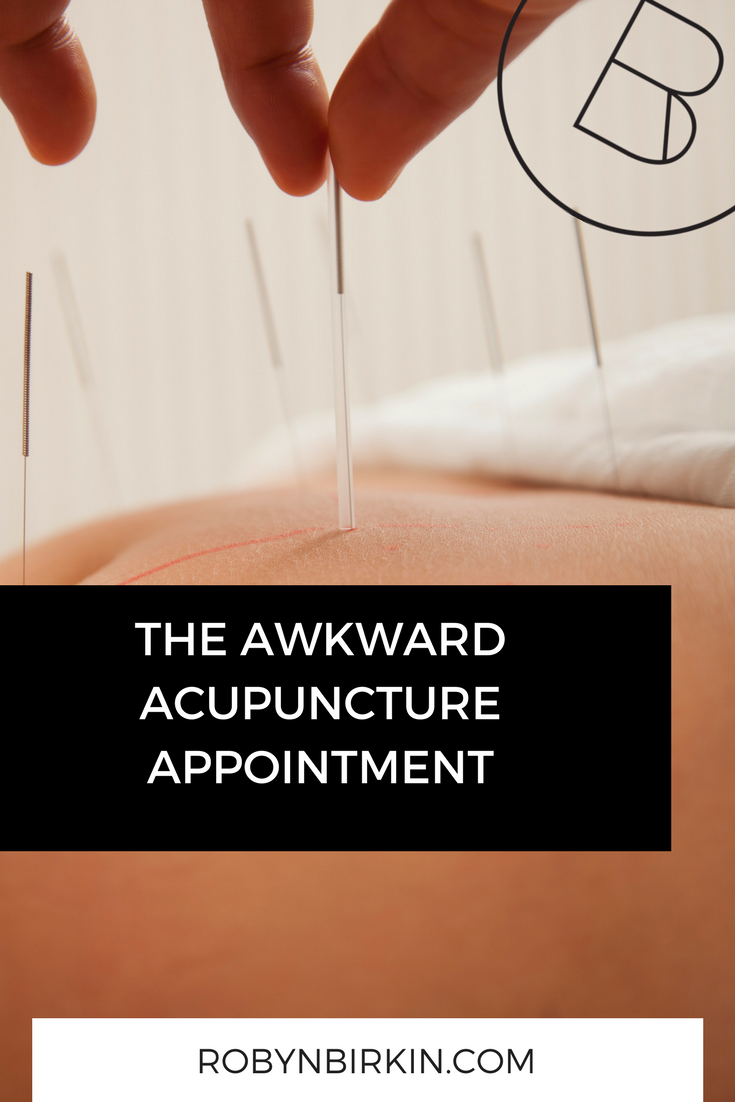