You are here: Home / Health and Wellbeing / Is soy really that bad for our health? 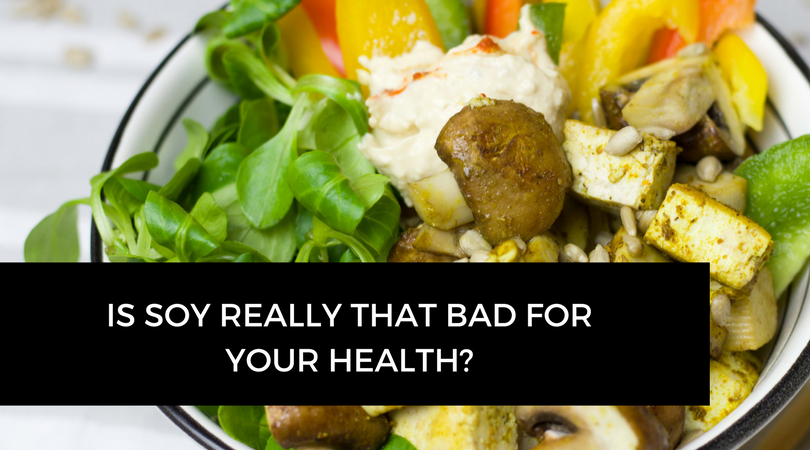 Among wholefood fans and vegans, soy food has become a hot topic and it seems that for many it is either a love it or wouldn’t touch it with a 10-foot pole scenario.

To me, the issue of soy is a typical example of how confusing the world of health and nutrition has become. Eat this, don’t eat that, do this, don’t do that…. I truly sympathise with the everyday consumer because we’re bombarded by often conflicting health messages constantly (and we have been for hundreds of years), which makes it hard to sift through what and determine what you believe to actually be correct and true, and moreso, validate where these claims have come from.

It is also an example of how dangerous information on the internet can be and how particular claims can snowball. One author writes an article on something, then another three authors write an article based on the original one, then another 10 authors write about it. Suddenly, you’ve got all these different articles on the internet with a particular health claim, but in actual fact, they’ve all just spawned from one article or person.

I believe this is exactly what has happened with soy.

Pretty much all of the articles out there against soy are based on Chapter 9 of Elaine Hollingsworth’s book Doctors are Dangerous, Soy: The Abominable Bean (which you can read here: http://www.doctorsaredangerous.com/chapternine.pdf)

You can also view an abridged version here: http://hartkeisonline.com/2009/02/27/dangers-of-soy-explained-by-health-activist-elaine-hollingsworth/.

I’m going to say that I agree with about 50% of what Elaine has written.

First up, I completely agree that one of the biggest problems in our society is corporate greed and reductionism.

A prime example of this is the dairy industry. They promote that dairy provides you with oodles of calcium, but conveniently fail to mention that although cow’s milk is full of calcium, the processes digesting it cause in your body actually leech more calcium from your bones than it provides, but the dairy industry is so powerful that their message has infiltrated all areas of health and nutrition.

Case in point, is that there is a Teaching Resources Page in the UK and Australia that provides free teaching resources to teachers … but clearly on the homepage you can see that Dairy Australia is a sponsor. If that were Coca-Cola or McDonalds we’d all cry bullshit, but because the dairy industry has been doing this for hundreds of years, we don’t bat an eyelid.

I have no doubt that the same things occur in the soy industry.

Soy is cheap to produce. In fact, soy and corn are some of the biggest crops in the USA, and thanks to corporate greed from Monsanto, mostly genetically modified. Where does all this soy go, you ask?

Soy and corn are fed to livestock. In fact, nearly 40% of the grains produced worldwide are to give to animals raised for meat. Aside from the fact that people across the world are starving to death so the more fortunate of us can indulge our meat habit, since when does a cow naturally eat soy or corn? Answer: they don’t. And it completely screws up their digestive systems, which in turn causes e-coli and all sorts of other grossness.

This is one of the main bones of contention with soy products. Those in the ‘against soy’ camp will tell you that soy will screw up your hormones, send you into puberty early, give you nipple budding, breast cancer and render you infertile for the rest of your life. They’ll also tell you that providing a baby with soy-based infant formula is like giving a baby the equivalent of 10 birth control pills each day.

Those in the ‘for soy’ camp will tell you that the isoflavines in soy will protect you from breast and colon cancer, relieve menopausal symptoms, prevent osteoporosis and cardiovascular disease.

Well, to a degree I believe both.

I have no doubt that soy can screw you up. My issue though comes back to knowing the whole story. Most of the studies conducted on soy have been conducted at extremely high doses. Almost all studies have also involved isolated daidzein and genistein (the two most commonly studied isoflavines), rather than the entire product like tofu. While the studies of the isolated isoflavines have shown links to breast cancer etc, it appears the studies that have used the whole product have not.

Well why is Elaine telling us of all these people who are getting sick?

Because there are all these people out there, who probably don’t realise just how much soy they’re eating, and not only that but the combination of what they’re eating WITH the soy.

Soy is used in all sorts of food you didn’t even realise such as hot dogs, hamburgers, cheese, ice-cream, cereals…. The list goes on, and in vegan/ vegetarian food, anywhere you find a substitute for an animal product, it probably comes from soy.

For breakfast I could have a soy smoothie with some gluten free bread that uses soy flour. For lunch I could have a sandwich that contains the same bread, filled with a mock-meat piece of ham or bacon, and for dinner I could have a tofu stir fry, with miso soup on the side.

That’s an overdose, but the same thing goes for all sorts of products including meat, dairy, wheat, alcohol, sugar, coffee, fat, gluten….. eat too much, and bad things will happen.

Did you know that alcohol is the leading cause of liver cancer? I’m sure that many of you still indulge in a sneaky glass or two though. The same thing goes for soy.

Soy is not the only product that contains phytoestrogens

I hate to break it to you, but phytoestrogens are in a tonne of foods including potatoes, broccoli, cauliflower, dates, apples, coffee, wheat and rice.

All soy is genetically modified

In the US, I believe it is really hard to find non-GMO soy (and I really sympathise with the farmers out there who produce it organically), and the US doesn’t make companies disclose whether their product is genetically modified.

Australia is a little different though. Food items need to be labelled if they are genetically modified unless they are highly refined, such as in mayonnaise, margarine and bread (although we should all be aiming to eat as little processed food as possible), and whenever I look at the pack of tofu, it pretty much always says organic or non-GMO.

Have you ever seen a soy cow?

Elaine says this as one of the bases of her argument, and claims that soy production involves a crap load of chemical processes. Yes, sometimes it does, but not all soy milk production does. It can be a very natural process (soak the beans, blend the beans, strain the beans, cook the beans).

Plus, dairy ain’t all that. As I mentioned before, I don’t believe dairy is healthy. It is also cruel. Imagine being artificially impregnated as soon as you reach puberty, then having your baby torn away from you straight after birth, your breasts made to produce an unnatural amount of milk, and being hooked up to a breast pump for hours each day when you could have mastitis, and then shortly thereafter, artificially impregnated again and so on…. Until about three years down the track when you’re milk production is not as good as it was before, so you’re killed. (sorry… can you tell I’m a vegan?)

Milk also goes through a process that isn’t so crash hot either. In order to kill most of the bacteria in the milk and make it last longer in your fridge, they basically heat it to a really high heat, which also happens to kill of many of the enzymes and nutrients in the milk…. And I haven’t even gone into the supplements the cows many receive (like antibiotics) or the environmental cost of raising the cows.

Asian countries don’t eat as much soy as you think or do they?

People in the for soy camp claim that soy can’t be all that bad if Asians have been eating it for years, yet Elaine says that is a lie, and in fact Asian countries only eat about 7/8 grams per day.

Having lived in Japan for a year, with three different families, each time for four months, I think I have a pretty good idea of how much soy a typical family eats. It is a whole heap more than that.

When I lived in Japan, we typically had miso soup for both breakfast and dinner, and dinner was often accompanied by a big chunk of tofu with soy sauce. Soy sauce and tofu pouches were a regular at lunchtime, and edamame was a common snack.

One of the things that always baffled me was how so many people in Japan smoke, yet cancer does not appear to be an issue there… at all. Plus, Japan has the highest life expectancy in the world.

One thing I will say though, is that the Japanese walk a lot more than people in the western world do and eat a lot more wholefoods. They also eat way less red meat (WAY less), less wheat, pretty much no dairy (unless they’re at an Italian restaurant or something and order a creamy pasta), heaps of seaweed, no soy milk and barely any processed foods. They also try to get a huge variety of foods in their daily diet – they aim for 30 different foods a day. I always remember at dinner time having about seven little plates of things in front of me. Again, we need to look at the whole picture.

So what is my take on soy?

You’ve probably guessed that I don’t think the soy is the devil like Elaine does, but I also think that people need to be conscious of how much they’re eating, because, like many things, you can easily overdose on the stuff which I believe can cause health problems.

I’d say I probably eat soy in one form or another a couple of times a week.

What do I think you should do?

So tell me, which camp are you in? 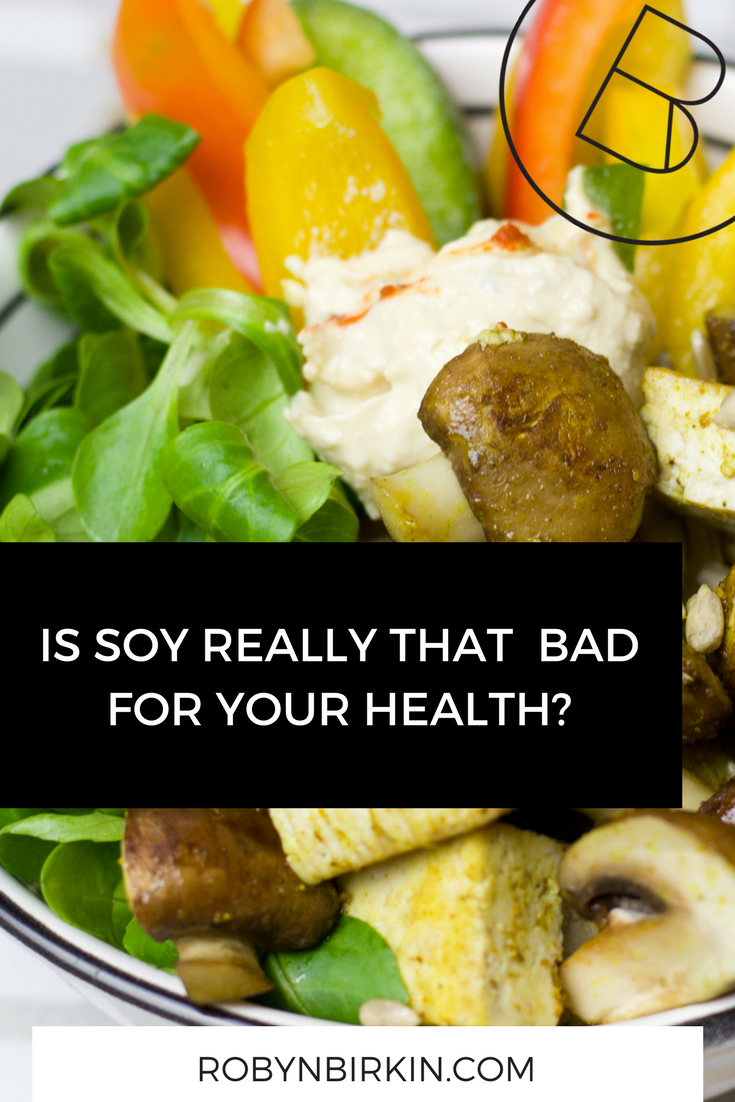 I really felt like once we had gotten over the hur

Celebrate every mini milestone you have 🥰❤️

Oh hey! I'm Robyn! Nearly 9 years ago my hubs and

Grace. Grit. Gratitude. Always. Why is it that th

Once you have the self confidence to believe in yo