20 tips for travelling with a baby

Interesting fact: when I graduated from high school, I spent a year in Japan as an exchange student…. I even majored in Japanese at university (in addition to public relations).

After visiting every year for a few years, we then wanted to visit other places, then home loans, IVF and bam, 10 years have passed since I’ve been there.

My mum and dad were keen to go and I thought that six months was a pretty good time to lug a baby around overseas (they’re out of the fourth trimester, but can’t run away from you!).

So, 2 countries (Japan and Singapore), 2 weeks, and 4 flights later, and here are my top 17 travel tips:

Honestly, I was back and forth about whether we should go or not, until I just took the plunge and did it. It’s 2 weeks out of your life, and seriously, not THAT much can go wrong. You’ll have an awesome time, I promise, so just book… now!

Just because your babe isn’t teething yet, doesn’t mean they won’t start on the trip. Chloe started teething on the way home…. which brings me to my next point.

Who knew that babies poo a lot while they’re teething?! Seriously, on the flight home, Chloe had four poo explosions, and in addition to normal nappy changes, I went through about 8 nappies on a less than 5 hour flight home… and a few changes in clothes. On the way there, I also didn’t calculate enough nappies to include the trip to the airport, time at the airport, the overnight stop, and used my last nappy just before landing.

Change their nappy before if you can

Before take off, and before landing – you might think ‘yeah, I’ll just change when we get off’, but you don’t want to be stuck in your seat with the seatbelt sign on with a leaky nappy.

Pack a change of clothes for yourself too

I had a vomit on the plane. Not a little baby spew, I proper spew. Trouble is – it landed on my pants. I had a spare top, but not a spare pants… so I just had to sit in it. Charming…

Chloe seemed to time her poos to just before take off, and just before landing, and on several occasions I needed to hot foot it to the plane bathroom to make a quick change. It was so handy having a small bag (think like a large-sized snap lock bag) that I could grab from the front seat pocket, rather than having to go into the overhead locker (because if you have a bassinet seat you can’t put anything under your seat) and fish everything out. It just had the wipes, about 3 nappies and some nappy bags – and if I needed to refill it at a more relaxed time, I could.

Get a bassinet seat 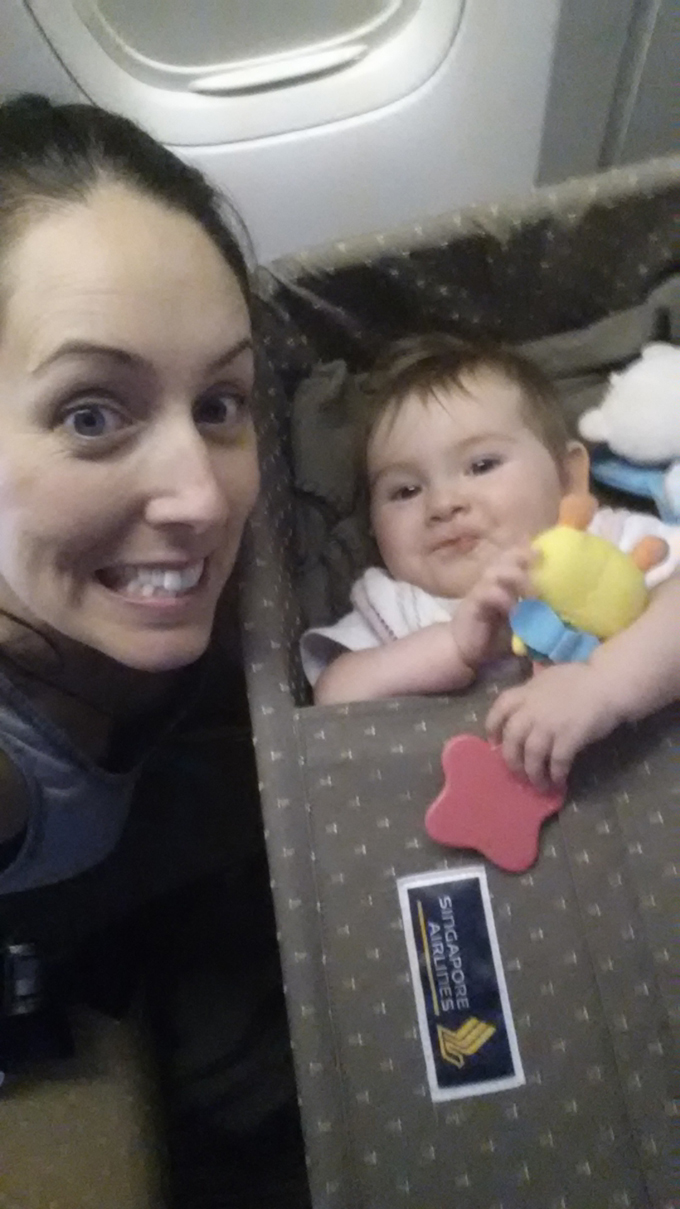 If you can, request a bassinet seat on the plane. There was no way Chloe was going to sleep in it (and to be honest – you need to get them out and put them on your lap when there is turbulance anyway), but it was really nice to pop her down for a play when my arms needed a rest or when I needed to mess about with the hand luggage.

Look out for airport strollers 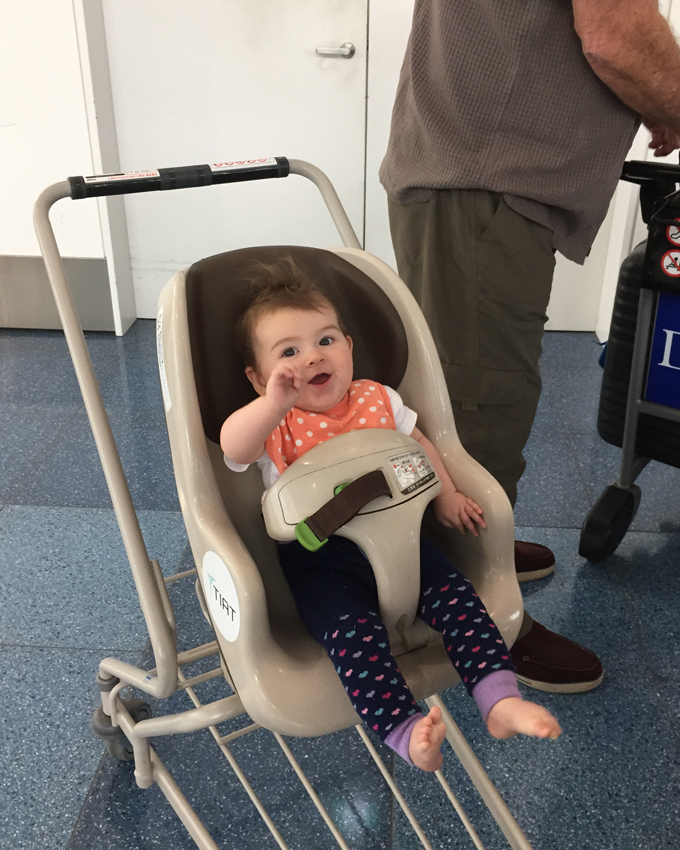 Perth airport has random dodgy strollers (that look like they’ve just come out of lost property, although nonetheless they have them), but Singapore and Japan had these airport strollers that could take your luggage too. Look out for them and use them if you can.

You don’t have to nurse on take off or landing

Lots of advice you receive says to nurse on take off and landing. I often nursed on take off (and tried to make sure it had been about 2-3 hours since she had last nursed), but your ears equalise for AGES on landing, and these days Chloe feeds for about 5-10 minutes only, so I just gave her the pacifier/dummy for landing and that worked well. We had ditched the dummy before we went (because she just wakes constantly for it at night, and also doesn’t seem to want it that much anyway), but on the trip I felt she needed it… and she really wanted it. Any type of sucking does the trick though. Or laughing. Or crying if none of that pans out for you.

If you are travelling with more than one adult, some of the airlines are really good (we flew Singapore Air and they always came and asked if someone wanted to eat their meal early), but if you want to both eat at different times, consider one person ordering a vegetarian meal or something. I had a vegan meal on the plane (as always) and it always came out first, so mum held the baby and by the time mum and dads meal came out, I’d already finished and could take her back. 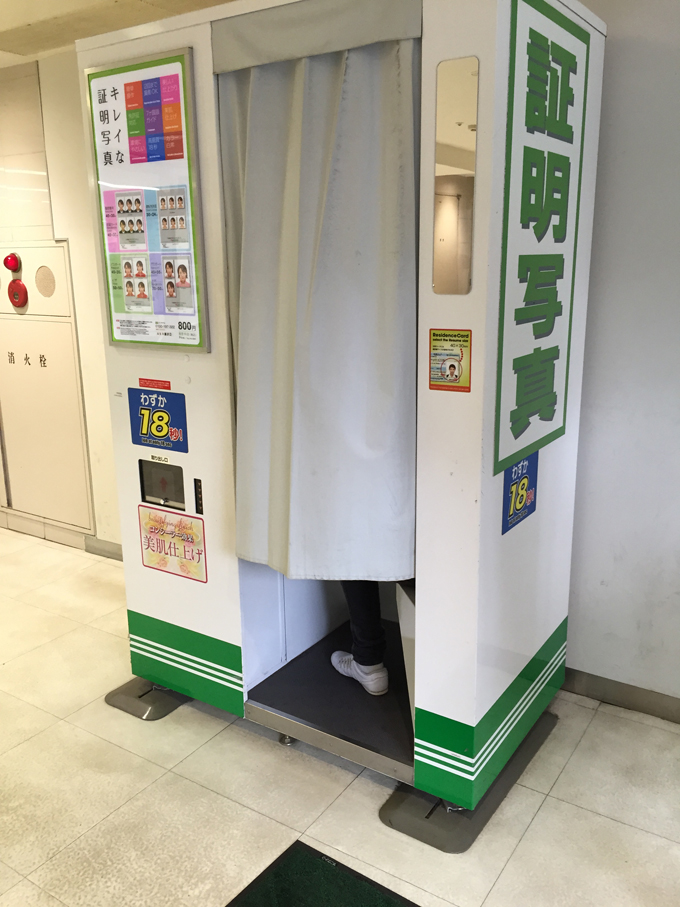 If you’re nursing (and even maybe if you’re not), you don’t know where you will be at the 3/4 hour mark, so just feed the babe when you can… and also where you can. I fed in a photo booth, in a corner of McDonalds, in a park and on a staircase… all of which was better than a packed train. Plus, if the weather is warmer, your babe will probably also be a bit more dehydrated.

You’ll have a great time, but it will be different to before you had kids. You can’t visit a billion places every day, and you can’t go out to pubs late at night, and if your babe was sleeping through the night, they might not while you were away, and that’s ok. Chloe has never, not once, slept through the night so that wasn’t an issue, but the kid did wake up more than usual. There was a lot of nursing back to sleep, and a lot of bedsharing too, and even so, we’re now back home and things are (mostly) back to normal.

Don’t be the fun police 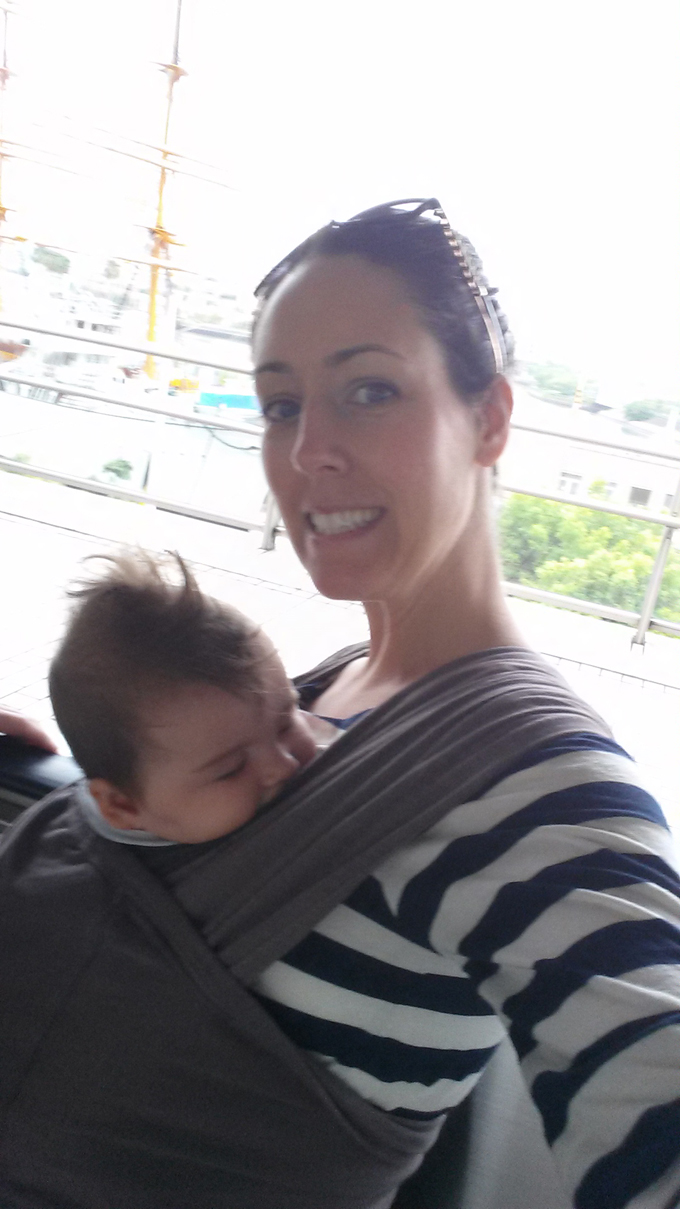 Yes, you can’t pull an all nighter like you used to, but don’t force yourself to live in your hotel room and have all naps in the crib. Babies are highly adaptable. My plan was to always have Chloe’s first nap in the crib, but that went out the window pretty much straight away – she almost preferred sleeping in the wrap, so there was no point in hanging around the hotel.

So napping in the hotel went out the window straight away, but I did (mostly) try to respect bedtime, and get Chloe to bed at a reasonable time – often about 6.30pm. So what do you do if your babe has to go to bed early? Here are some tips in this tip:

Make the cot as homely as possible

Chloe had her sleeping bag, her lullabye and her (unwashed) bed sheets while we were travelling, and she went down a treat every night.

We often needed to keep the babe occupied while we were at a restaurant or on the plane, and so we had lot of little toys for her to play with. I was also given this Jellystone necklace at my baby shower, which was a real hit with Chloe on the trip. She also liked playing with the unopened pack of peanuts, plastic cups etc – all the random stuff you have on airplanes, so you can improvise too.

Buy nappies at your destination

Wow – nappies take up a lot of room in your luggage! I took one pack, but after a few days in Japan, I hopped to a Babies R Us and bought another pack. 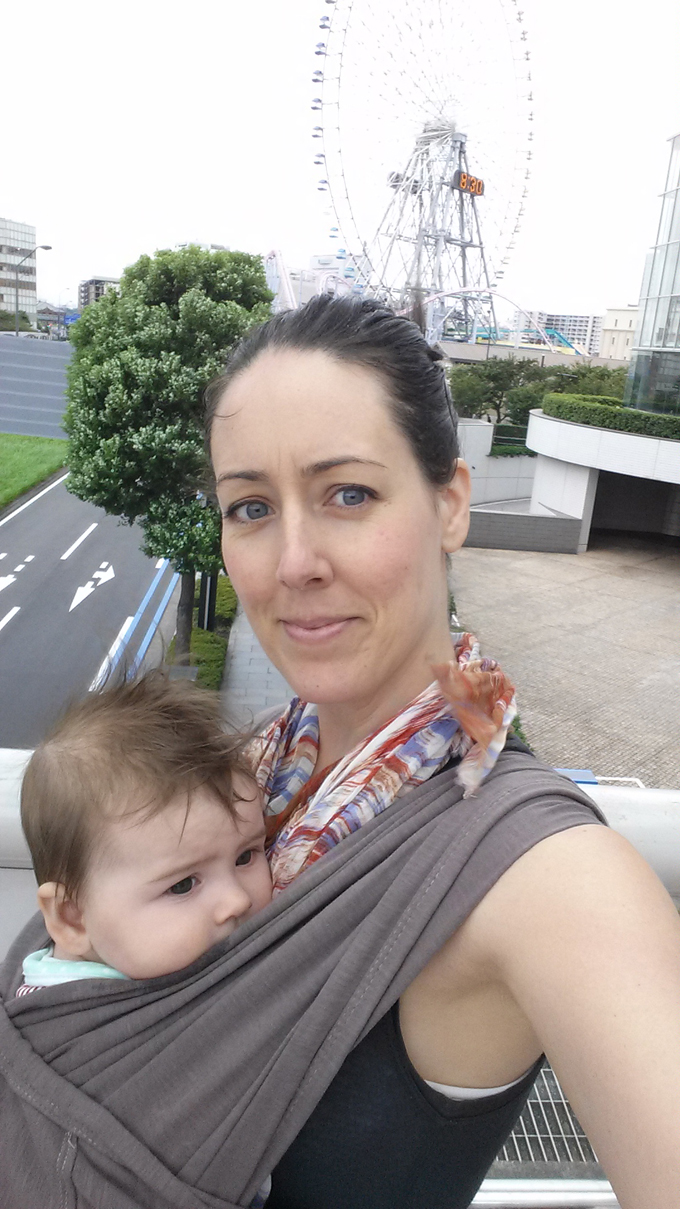 I took Chloe in the wrap everywhere. It was a present at my baby shower, and Chloe liked it when she was first born, then decided she didn’t like it, then decided she LOVED it (so keep trying if your babe isn’t a fan). I borrowed an Ergo, but I just couldn’t get her to like it before we went (another lesson – if your baby doesn’t like the Ergo, try a wrap or a sling), and the wrap was smaller too. We used the stroller lots (I have a City Mini GT), but the wrap was handy for the airport, and transfers and navigating staircases etc – it was a lifesaver.

A backpack is so much easier than a handbag or nappy bag at airports and when you’re walking around.

So, I would totally travel alone with Chloe, but having her grandparents there made life so much easier. As mentioned, we booked interconnecting rooms, and on flights I was able to palm her off to eat my meal, but also sometimes my dad would take her for an hour or two while my mum and I went shopping.

So what are you waiting for?! Book that trip!

Coming up soon, I’ll also publish a post about heading to Japan with a baby.