Is The Universe Telling You to Quit TTC

Welcome to today’s podcast where I want to talk about a topic that I am sure many of us have wondered at some point: is the universe sending me a sign to quit trying to conceive?

Do you often question whether or not you could continue or what you life would look like without children or even consider adopting? I did!

And I also see comments regularly that ask how people know when it’s time to give up trying to conceive. Here are my thoughts and some stories of times on my journey when I felt like it might be time to give up.

I remember feeling very low at the beginning of our journey. There would be times when I would ugly cry on the bed for hours and question whether or not I had any strength to continue this journey and whether or not I could do another cycle.

I always found the concept of taking a break to be really hard because I had already completely changed what I was eating and I was hyper-aware of when I was ovulating that it almost seemed like there was no way I could ever take a break without never having sex. My emotions were battered and bruised, I felt like this punching bag. So I questioned often, whether or not I could continue, what would my life look like without children, I talked to Ross about whether we should just adopt. We all know, if we’re in this community, that adoption is not just this easy thing, adoption is freaking hard! Even if you are paired with a beautiful child, sometimes they have real issues that they have to deal with, so it’s not just a quick fix or easy fix.

Once I had my miscarriage which was after my first IVF cycle, which was two years into my journey, I didn’t feel like I had it in me to continue, I had zero emotional energy, I didn’t want to talk to anyone at work, I just wanted to sit at my desk and have a pity party all by myself. I felt like I had been tested to my limit. I had ovarian hyperstimulation syndrome (OHSS), I had been stuck in bed for the entire Christmas holidays and then they told me the pregnancy wasn’t viable. There was a huge part of me that thought that this was a sign from the universe to give up, a sign from the universe that we were never meant to be parents and that maybe we were supposed to move on.

Then I went to my fertility specialist (Jay from Fertility North) for a debrief and he asked me how I was coping with it all. I brushed it off and didn’t make eye contact and said, “I’m fine, I’m doing fine.” He called me out and said, “No you’re not, you’re angry, you’re so freaking angry that you’ve invested so much time, that you’re used to being successful and this is not panning out. That you are feeling like a failure when you’re not used to failure in your life, and so you’re freaking angry, you’re not just sad, you’re really pissed!” He saw through my act, I didn’t even realise I was angry either. I felt sad, I felt hopeless, I felt despondent but I never realised how much rage was inside me. I was at this point where I thought I couldn’t go any further. I had just done two ovulation inductions, two IUIs, one got cancelled, I’d done this IVF cycle that had failed and I said to him, “Is this the end of the road?” and he told me I still had two years to go! That was the turning point that made me realise that I could go a little bit longer.

Prior to that all I could see were signs telling me that I needed to give up on my journey.

Everything was pointing to, ‘this was not meant to be’.

The next cycle that I had was a frozen embryo transfer (that failed), by the time i had that frozen embryo transfer, that was my transformation point (in between the miscarriage and the transfer), where I had worked really hard pretty much on my own and I felt like I did alot of the work myself in learning the skills to cope. Now I know 100 times more than I knew then and even now I’m better at coping with my emotions and dealing with the hardships of life, dealing with the ups and downs and accepting what happens. At the frozen embryo transfer, it was the first time I was OK with whatever the outcome was going to be, because I was prepared to continue trying. I was in it for the long haul.

I don’t believe that the universe is sending us signs to quit. I think the universe gently nudges us in a direction and I think that we need to open our lives to pivoting. That means, that when we have a particular goal, being open to that goal not playing out the way we imagined it playing out.

I firmly believe the universe is never sending us signs to quit!

See also another post on How do you know when to give up trying for a baby?

And listen to this episode of my podcast 2018: My Year in Review

If you loved this episode please share it with a friend! 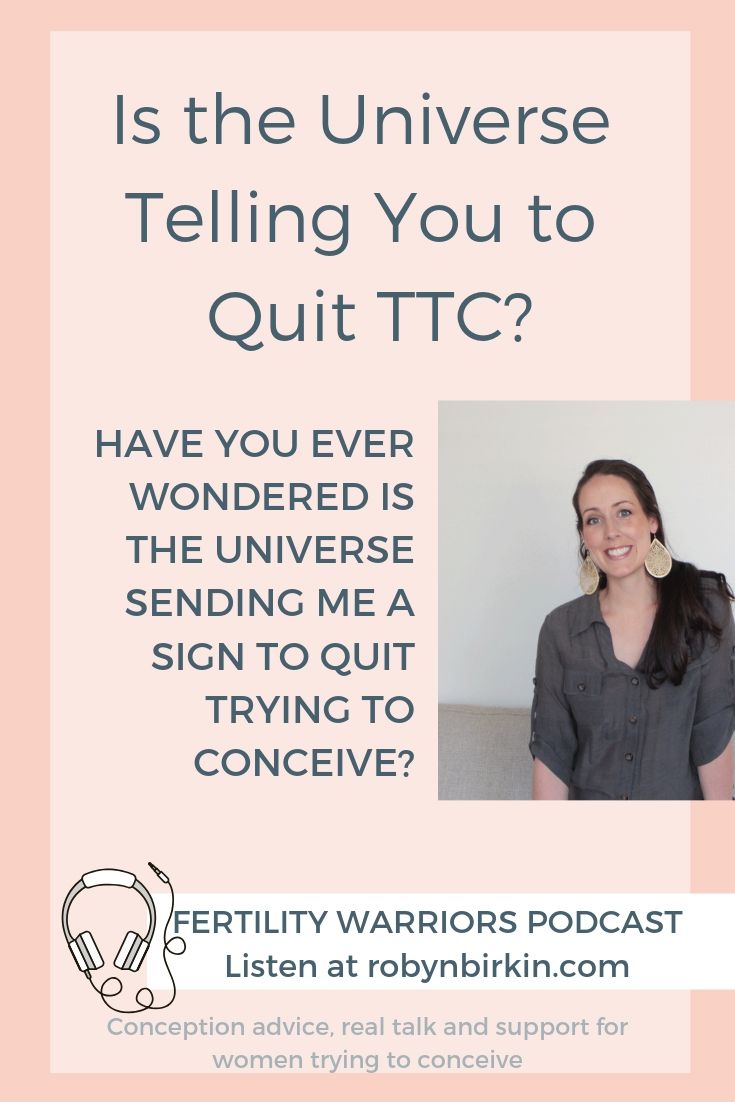