Honestly, I feel like time just flies by. It’s been a crazy month over here at MDM HQ, and we’ve had the old ‘daycare germfest’ and been sick not once, but twice!

The first time was a random rash all over her body (but she was otherwise fine… well actually in hindsight she may have been a bit off the few days before, because she actually napped like a normal baby – silly me – I thought she may have actually been getting her act together lol), and then a few weeks later she caught a nasty cold. All I can say is, thank goodness for grandparents! 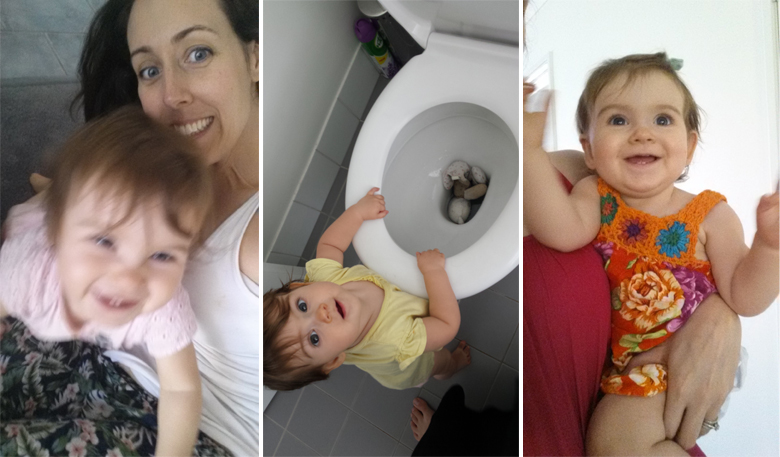 This kid is so fast, and into everything! She keeps trying to climb over things so you can just picture what the next couple of months may hold for us.

She is also couch surfing and walks on her own with her walker. I love the way she does her little strut.

So, naps. The kid has been refusing naps for a while now. She always refuses the afternoon nap, and lately there has been a bit of hanky panky with the morning nap too. Except for one week then for 3 days she took a 2 hour midday nap… although I’m going to chalk that up to her feeling off colour!

Nighttimes… well…. last month I wrote that we were back to feeding three times…. but at the end of 11 months, the kid was up to 6 times a night. Tipping point reached. What is it with this kid?

We had an appointment with our fertility clinic and they’ve said that (in addition to not really being able to wait) Chloe has to be fully weaned before we can begin treatment. So we’ve started weaning. I’ve dropped the two middle of the day feeds, and am working now (at 12 months) on the night feeds, and then I’ll drop the other two.

Chloe is able to eat whatever diet she chooses, but for now, we’ve compromised on a vegetarian diet. It’s also easier if we’re eating out or if she is staying with someone else. She eats quite a lot of vegan meals though.

In the morning we’re still doing baby cereal. Oh the things I said I’d never do, but cereal was the only thing I could get her to eat. I’m trying to get her used to chia pudding though and will hopefully move her onto either porridge, oats or chia pudding. For morning tea we have smoothies or fruit, for lunch we usually have a tasting plate with veggies, a few organic veggie cracker things and fruit, and dinner is often a version of what we’re having or chunky style puree.

Chloe has 6 teeth now, so she is a superstar at munching.

Work is going really well. I actually really enjoy that time to myself and feeling like I’m (semi) important again. I really start to feel claustrophobic after being in the house for days on end, and going to work breaks up the week really well. Mon – Weds is mummy and Chloe time, then Thurs – Fri I’m at work and Chloe is at daycare, and then Sat – Sun is family time

Loves: Her snuggle bear, standing and couch surfing, walking with her walker, my mum and dad, anything with buttons, water play (seriously – just grab some oven trays and a wooden spoon and go nuts in the backyard)

Dislikes: Sleep (what’s new ha ha), sitting still, having her nappy changed, when her mummy is more than about half a metre away from her