Hello, remember me? Once upon a time, I used to post recipes and articles about my life….ha!

Modern Day Baby (AKA Chloe, or Chloe Bear) has other plans. Unfortunately, I don’t think the recipes are coming back for a few more months, but I’m going to do my best to get out there and post some more. 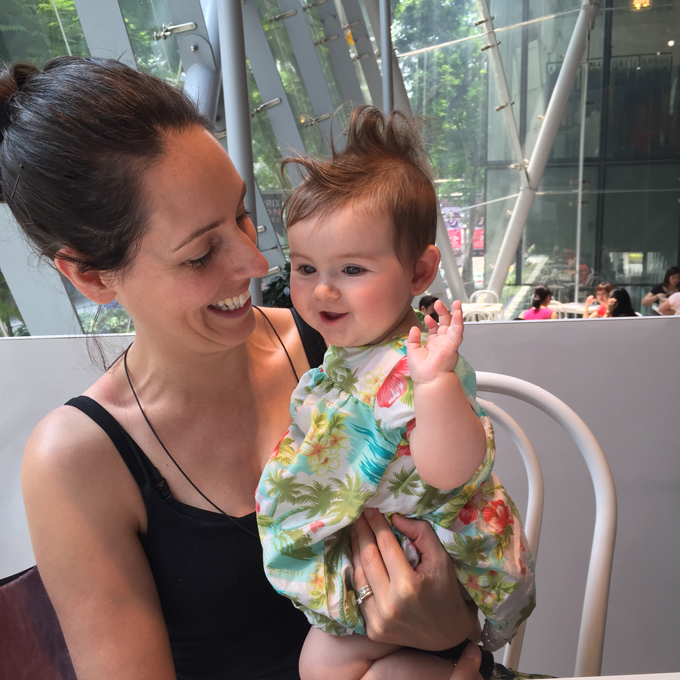 I absolutely love reading the archives of the posts from Oh She Glows and Cupcakes and Kale about their bubs, and I have resisted so far, but I thought I might do something similar from now.

Chloe is 6 months old already. How does that happen? Until now I’ve felt like time was going rather slowly, but now that I’ve cracked half a year, it is just going so fast!

I’ve really noticed a difference in her since she has turned 6 months – she is honestly like a different person.

All of a sudden she is really trying to get active and move around, and is constantly trying to do sit ups and pushes her bum up in the air. She cracks me up.

She also does this thing where she shakes her head like she is saying ‘no’, but she moves her whole body around and I have no idea what she is actually trying to tell me.

She also spends most of her time on her belly now, or sitting up. I know most mums worry about tummy time, but I think so long as you offer it regularly (even if it is just for 30 seconds), then one day they will just get the hang of it, and be cool chilling there for a while.

After waking up about 563 times per night (in all seriousness it was bananas – like every hour) from the time Chloe was 3.5 months – 5 months, she started only waking about twice a night, around midnight and 4am. We have just got back from a trip to Japan and Singapore (more on that another day) where sleep was all over the place (and most nights Chloe and I ended up bedsharing), and it is still not the same, but better than when we were away. I think I was up three times last night – I think once you get to about the 6 month mark, you actually stop caring as much, and looking at the clock, and just get on with it.

Kid just cut her first two teeth though, and is getting back in the swing of things after the trip so I get it.

Naps… well, naps have never been good. I’m just trying to drop her down to 2 naps a day to see if that makes a difference, and already I think it has, even though it has only been two days. I just don’t think she was tired enough to nap well before.

Chloe loves to breastfeed, and I’ve been fortunate to have not suffered too much with it (aside from a rocky start), so I’m determined to keep going until at least a year. I have had a few chomps though, just before her teeth came through.

In honestly, I’d be happy to continue longer, but with our fertility issues, I can’t be feeding when we get back on the wagon, so we’ll see how that goes.

We have just started the munchkin on solids and have gone down the baby led weaning route. Chloe just refuses to be spoonfed, and because she doesn’t really nap, I don’t have the time to sit and eat my lunch after sitting and trying to feed her, let alone make her separate meals to me. I can’t say much is going in, but I’m not too concerned until she is about 8-9 months old. I can tell already that she is starting to get the hang of it. Sometimes if we have something that requires a spoon, I just load the spoon for her and she does the rest. Re-loading the spoon has it’s challenges though….

I’ve officially resigned from my full-time role as a marketing manager (sniff sniff), and am just doing a few bits and bobs from home at the moment, and will be working in the office assisting with a few things for about one day per week next year.

In some ways I wish I didn’t have to work at all, but I know that once you get out of the marketing industry, getting back in is really tough, so a little bit of pain now, for gain later I think.

Nicknames: Monkey and Chloe Bear (because she absolutely loves her wrap, and I always think she looks like a little koala bear when she is strapped to me)

Loves: Tickles, being held up in the air, peek-a-boo, stretching in the morning, rhymes, bathtime, the cats, banging her hands on things, being outside

Dislikes: Naps… ha ha, her car seat, getting changed when clothes go over her head, prickles on daddy’s face, people giving too much too soon – I can’t describe it but when people come up to her too enthusiastically too soon the bottom lip comes out

Well that’s it for the moment. I’m happy for anyone to touch base with me if they’re curious about anything else, because I know I’ve read the posts from OSH and CAK SO many times! I think as first time mums, we read the books (or websites), and understand that babies aren’t textbook, but often don’t know what others are doing, so if you’re curious about anything, then fire away and I’ll put it out there.