The sun is shining outside here in Perth and a new week awaits. Rosco went away camping this weekend, so I got myself into the kitchen and messed around with a few recipes I’d had in my head.

One of those is pizza bases. I’ve had a few fails recently on this front, but I understand now. With pizza bases that aren’t made from flour (think chickpeas, cauliflower and quinoa), it appears you basically have two choices.

Squeeze as much liquid out as possible (like really squeeze it out!) or go batter style.

This weekend, I went batter style, and made a quinoa pizza.

I must admit, in the past I haven’t been such a fan of quinoa, but it is growing on me. 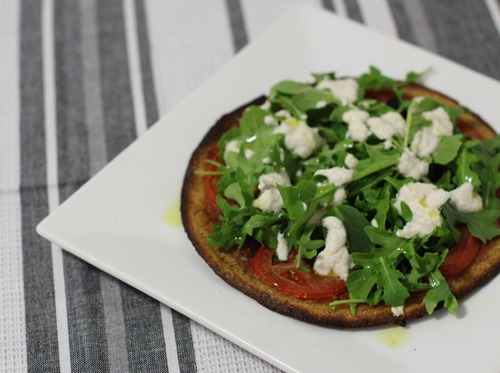 Save Print
Quinoa Pizza Base
Author: Robyn B
Recipe type: Main
Serves: 1
Makes one 20cm pizza, thin crust.
Ingredients
Instructions
Notes
After you've initially baked the base in the oven, you can then put the base in the fridge for later, or even freeze it.

In case you're wondering, I topped my pizza with passata, italian herbs, sliced tomato, sliced kalamata olives, then then when it came out of the oven, rocket (with a teeny drizzle of oil) and cashew cream.

If you're not sure what cashew cream is, you're not living. It is the best! Basically you soak cashews in water for a number of hours, then blend them up with a bit of water. Add some salt and pepper, plus a bit of vinegar and you have a basic cashew cream. More water and vinegar = more like salad dressing or sour cream, less water and vinegar = more like a soft cheese.
3.2.1255
Have a great week.